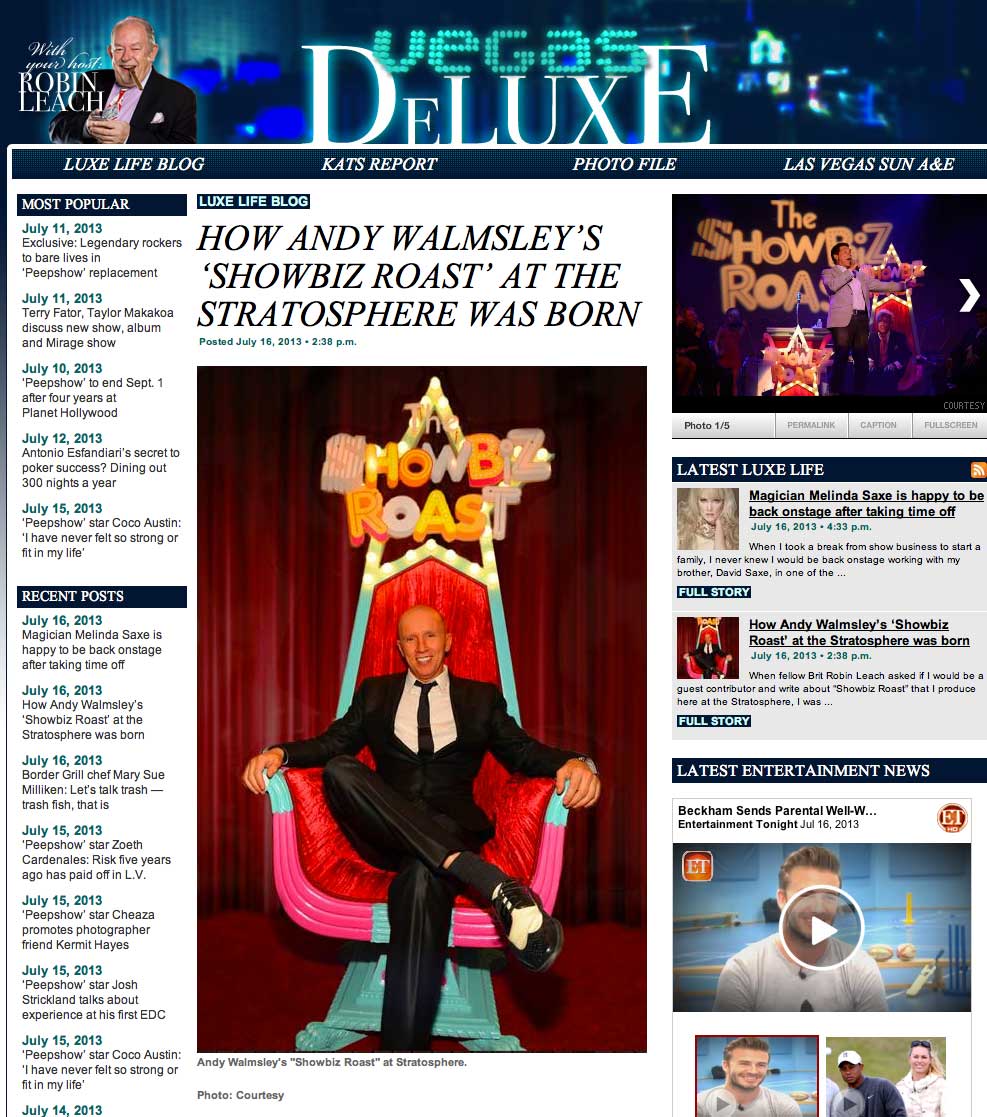 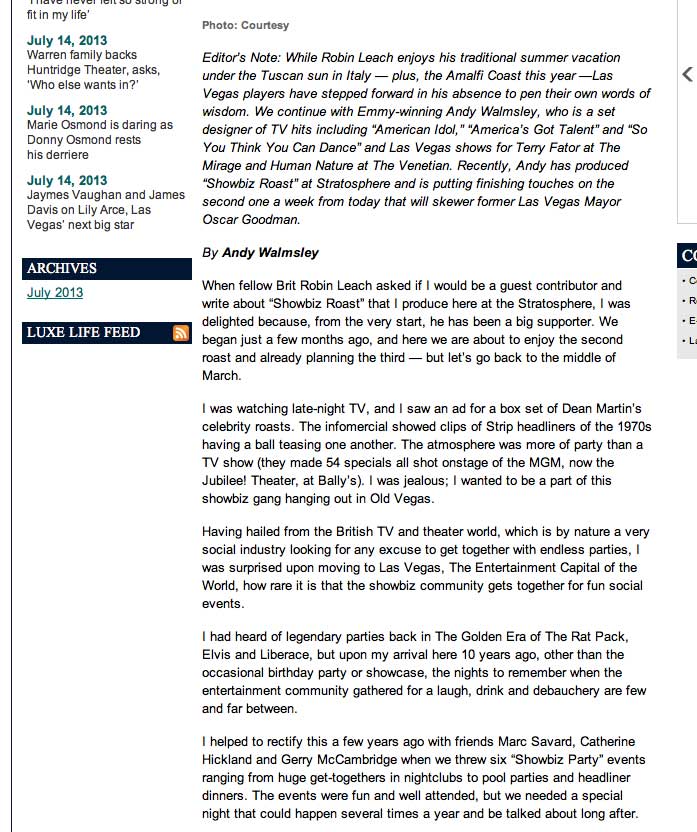 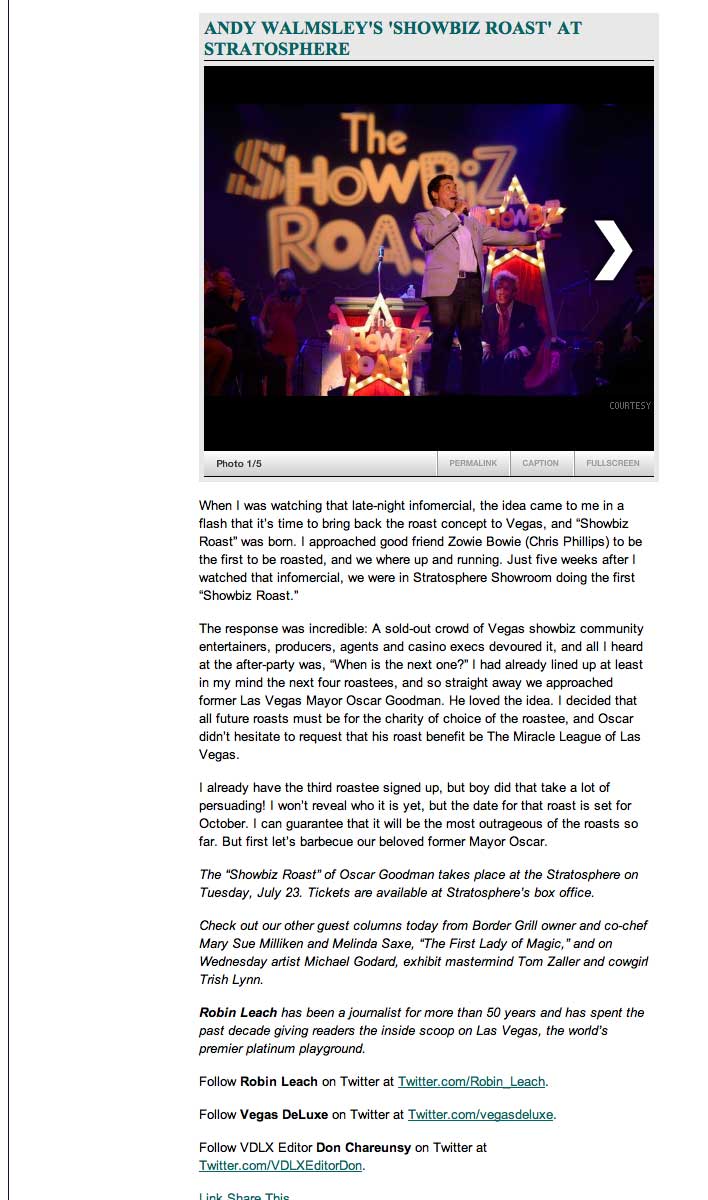 Editor's Note: While Robin Leach enjoys his traditional summer vacation under the Tuscan sun in Italy - plus, the Amalfi Coast this year - many Vegas players have stepped forward in his absence to pen their own words of wisdom. We continue with Emmy winning Andy Walmsley who is a Set Designer of TV hits like American idol, America's got talent, So you think you should dance And Vegas shows such as Terry Fator and Human Nature. Recently Andy has produced a series of ' Showbiz Roasts ' in Vegas and is currently putting finishing touches to the next one which will skewer former Mayor of Las Vegas Oscar Goodman.

When fellow Brit Robin Leach asked if I would be a guest contributor and write about the ' Showbiz Roasts ' that I produce here in Vegas I was delighted because from the very start Robin has been one of my main supporters. I say the very start but actually that was just a few months ago and here we are about to enjoy the second Roast and already planning the third but lets go back to Middle of March this year. I was watching late night TV one evening and I saw an ad for the a Box set of the Dean Martin Celebrity roasts, The infomercial showed lots of clips of all the famous Strip headliners of the mid 70's all having a ball teasing each other, the atmosphere was more of party than a TV show ( they made 54 specials all shot on the stage of the MGM, now the Jubilee theater and Bally's ) I was jealous, I wanted to be a part of this showbiz gang hanging out in classic Vegas. Having hailed from the British TV and Theater world which is by nature a very social industry looking for any excuse to get together with endless parties, I was surprised upon moving to Vegas, ' the entertainment capital of the world ' how rare it is that the showbiz community gets together for fun social events. I had heard of legendary party's back in the golden era of the Rat Pack, Elvis and Liberace but upon my arrival to Sin City ten years ago other than the occasional birthday party or showcase the " nights to remember " when the entertainment community came together for a laugh a drink and general debauchery are few and far between.

I helped to rectify this a few years ago with friends Marc Savard, Catherine Hickland and Gerry Mcambridge when we threw half a dozen ' Showbiz Party's ' ranging from huge get-togethers in night clubs to pool parties and headliner dinners. These events were fun and well attended but our community needed a special night that could happen several times a year and be talked about long after.

When I was watching that late night infomercial the idea came to me in a flash that it's time to bring back the roast concept to Vegas and so the ' Showbiz Roast ' was born. I approached good friend Zowie Bowie ( Chris Phillips ) to be the first to be roasted and we where up and running. Just 5 weeks after I had watched that infomercial we where in the theater doing the first Roast. The response was incredible a sold out crowd of Vegas Showbiz community entertainers, producers, agents, Casino execs devoured it and all I heard at the after party was " when is the next one? " I had already lined up at least in my mind the next 4 roastee's and so straight away I approached former Las Vegas Mayor Oscar Goodman, he loved the idea. I decided that all future roasts must be for the charity of choice of the roastee and Oscar didn't hesitate to request that his roast benefit The Miracle League of Las Vegas. I already have the third Roastee signed up but boy did that take a lot of persuading, I wont reveal who it is yet but the date for that Roast is set for early Oct and I can guarantee it will be the most outrageous of the Roasts so far. But first lets Barbeque our beloved Mayor Oscar. 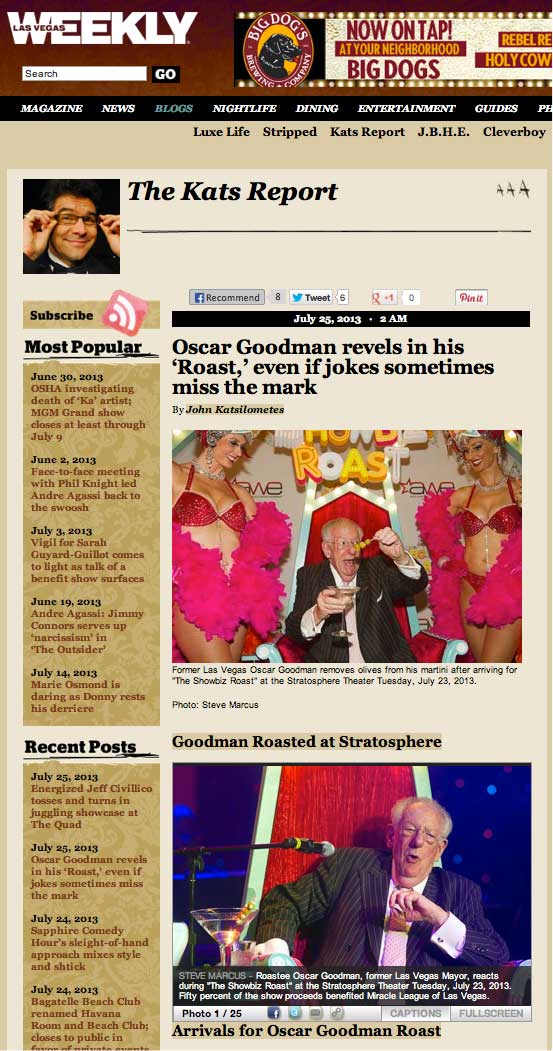 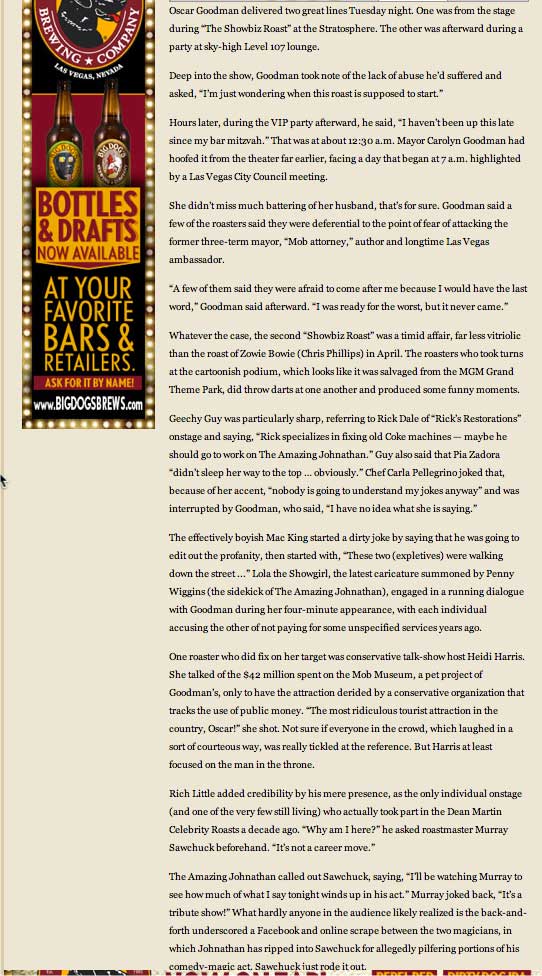 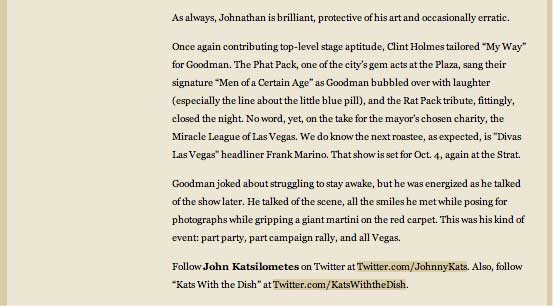 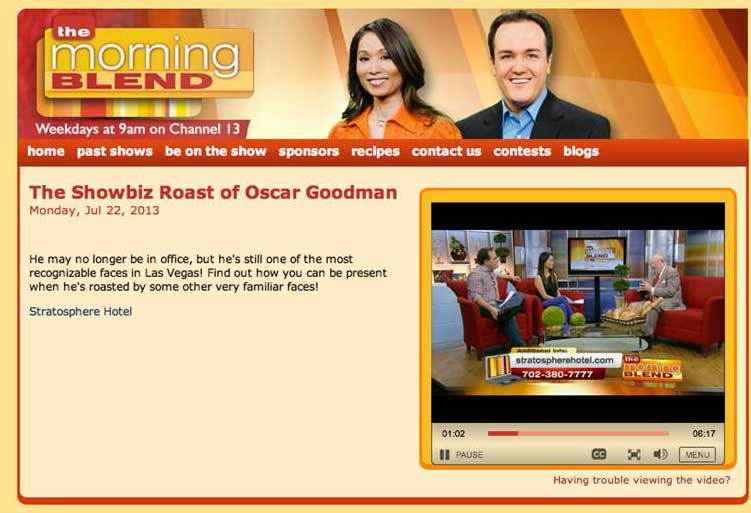 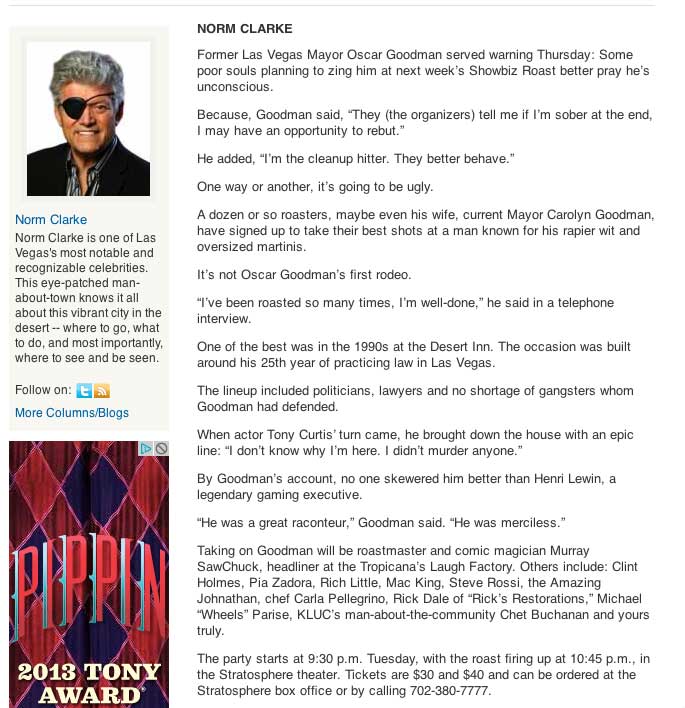 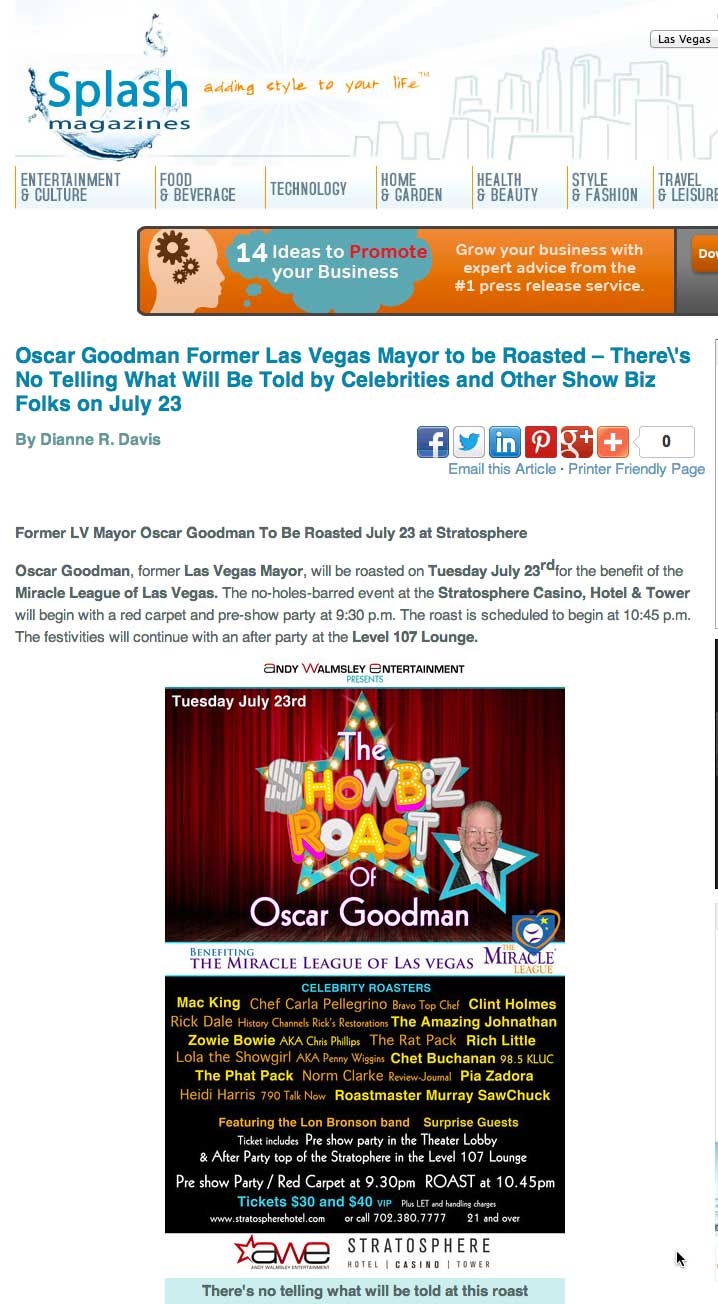 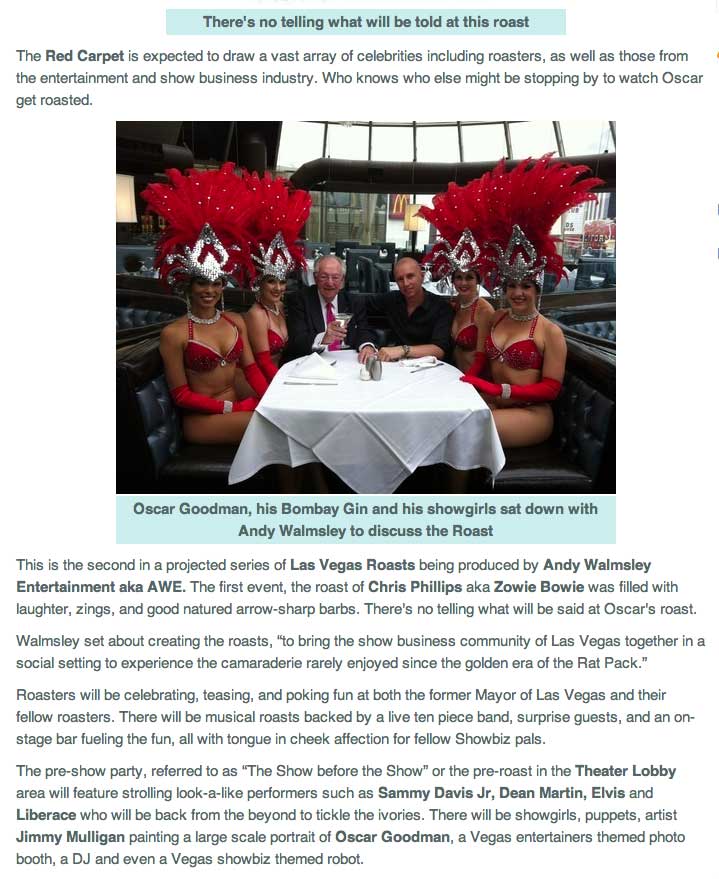 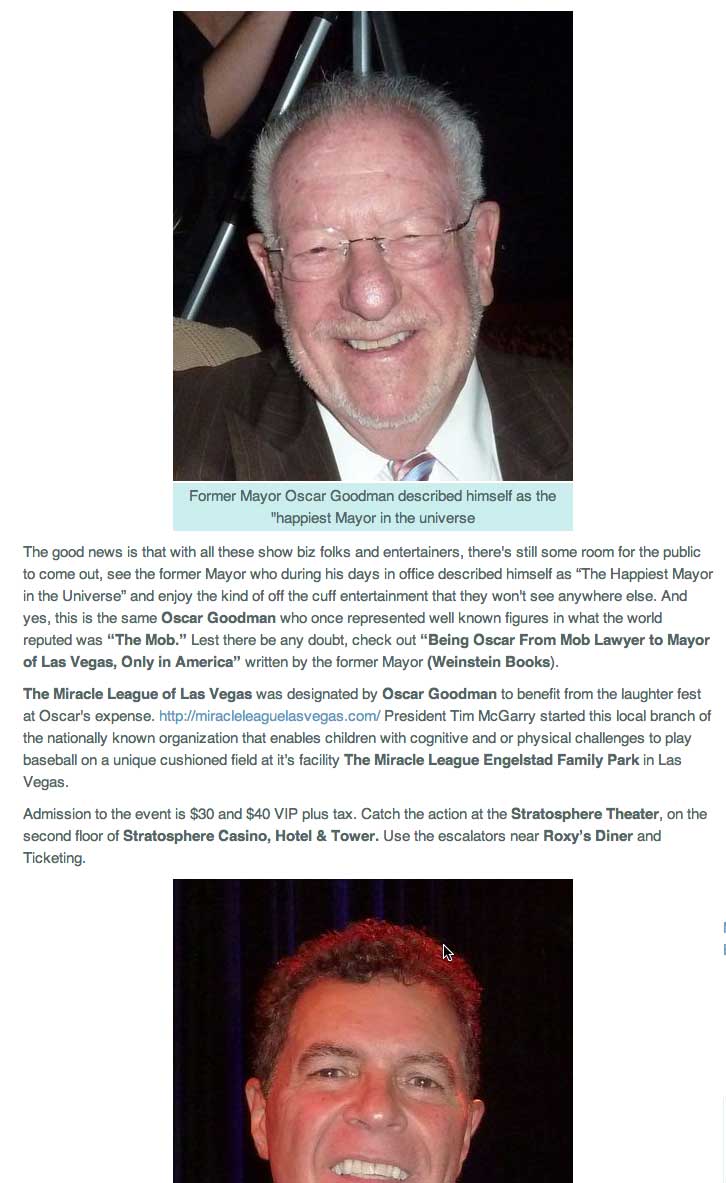 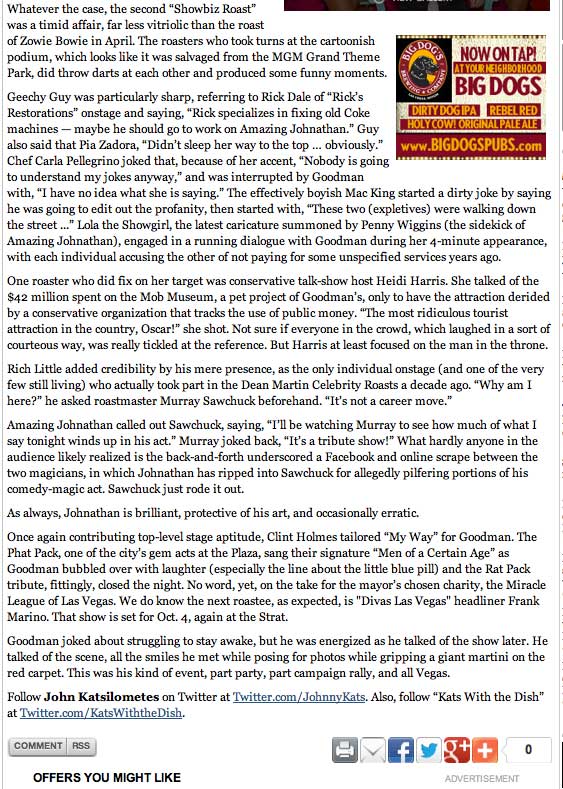 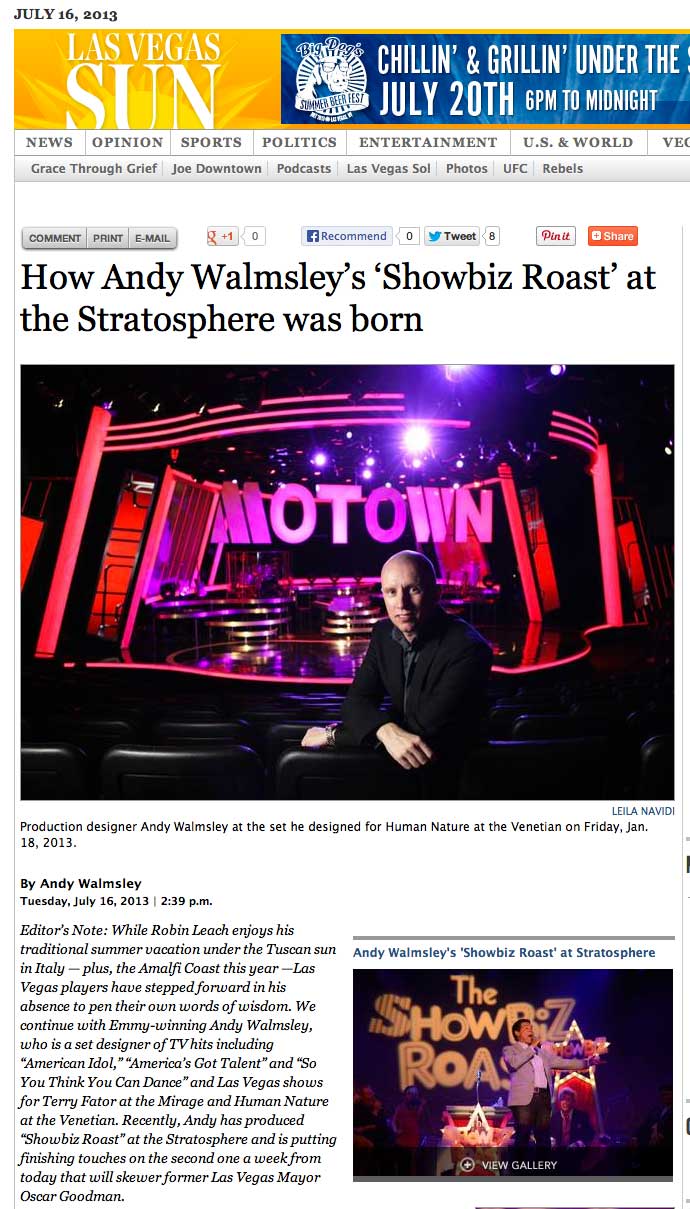 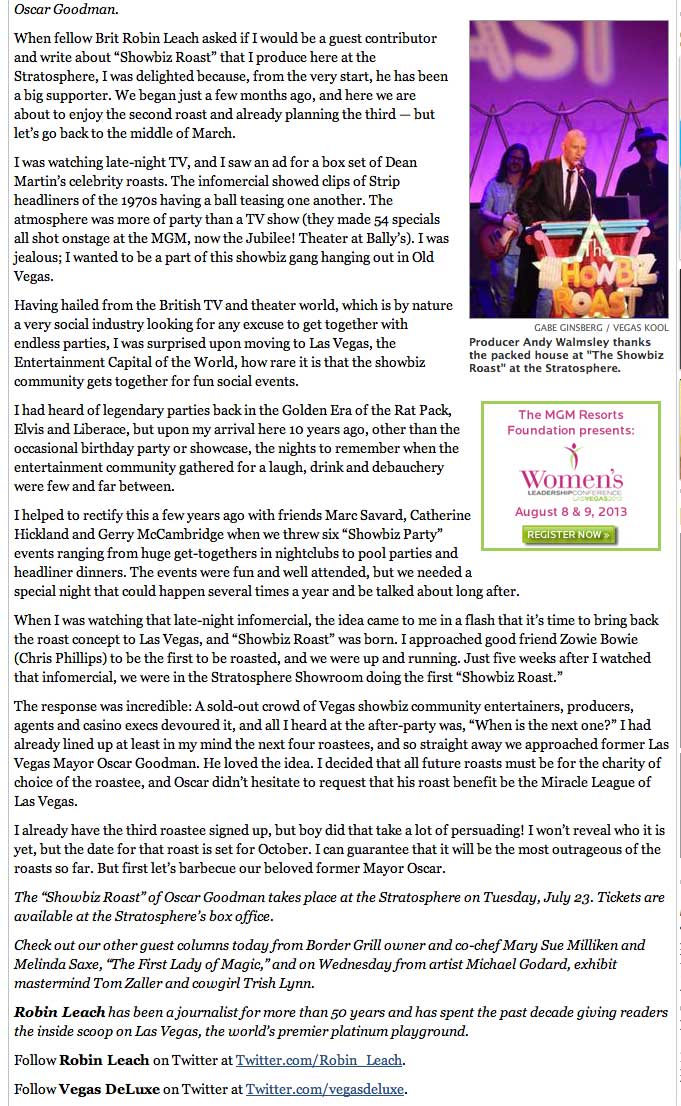 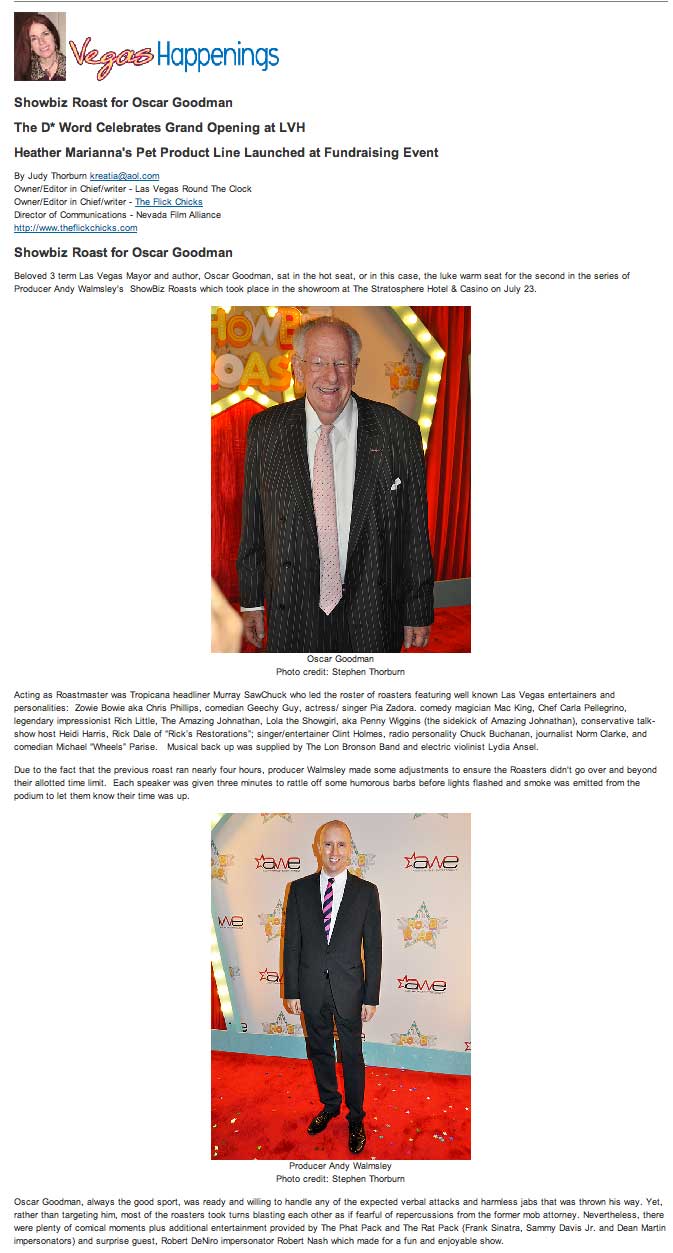